We’ve been hearing some local people’s stories of their family members during the great war.  If you would like to submit yours please do so via the contact us page.

Harold Sutcliffe seen on the left in the above portrait, joined the war effort with his twin brother Horace (on the right) as part of the Duke of Wellington Regiment.  Harold unfortunately didn’t make it home, he suffered a shrapnel wound to the chest and passed away with his twin brother by his side on 27th November 1917 at 23:45.  Harold is commemorated at the Cambrai Memorial. His great niece is one of the organisers of this event and she was born at 23:45 on 27th November 1989. Lest we forget.

Robert Biggin (on the right) was killed on the first day of The Somme 1.7.1916. He was 19 years old. He was from Dore. He is remembered at Thiepval Memorial.
His brother George (on the left) was killed a year later in Belgium, 19.7.1917, aged 27. He is buried at Ramscapelle Cemetery.
Both brothers are remembered on the war memorial in Dore Village, and also on a plaque in the village church.
They also had another brother, Ellis, who was injured, but thankfully survived.
With thanks to Claire Holmes for this story.
Thomas Howden 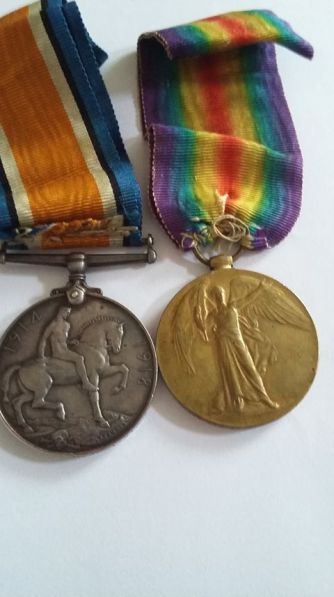 These are the medals my Grandfather was given. He never spoke much about the war to my mum and her sisters , but when he used to take me to the Brightside Wreck (play ground) all the kids would come up to him asking about the stories he’d told them. There would be about 10 kids and he would say, ‘Me and my friends in our group were trapped in the fields and dare not lift our heads. We would hear voices calling out ‘Tommy’ – because the enemy thought everyone was called ‘Tommy’ – but we got them shooting and some did not make it’.

My Grandad had tears in his eyes and would say that’s it for today. All the kids shook his hand and said thank you Tommy. Grandad never spoke much about it he was still emotional about it – that was in the 50s.

With thanks to Sandra Adams for this story.

My great uncle was William Henry Gregory and he was born in 1895 and lived in Duke Street, Park, Sheffield. He joined the York & Lancaster Regiment on the 7th September 1914 (his regimental no. was 2337). He was 19 years old.
He embarked from Folkestone on the 13th April 1915 for Ypres in Belgium. He was promoted from private to lance corporal on the battlefield on 27th July 1915 and was killed in action on the 16th September 1915. He is buried in an unidentified grave in Malakoff Farm Cemetery and his name is on the memorial cross in Duhallow ADS Cemetery near Ypres, Belguim. He was awarded the victory medal and the British war medal.
With thanks to Sharon Abbey for sharing this story.
Harry and Edwin Smith 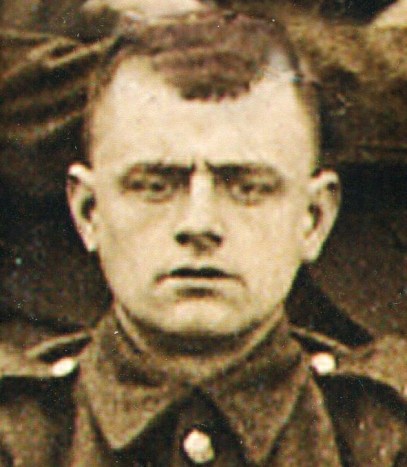 Harry Smith was my great great uncle and was born on 22nd April 1890. He lived in Walkley, Sheffield. He joined the Royal Garrison Artillery as a Gunner (Regimental number 154420) and was killed in action in France on 4th April 1918. He left behind a wife and two young daughters.
Harry’s younger brother Edwin ‘Teddy’ Smith was born on 19th June 1899. He joined the Northumberland Fusiliers 1/6th battalion (Regimental number 66589). I have his diary that he kept during his service and he wrote that he landed at Boulogne in France on 1st April 1918. His battalion came under heavy machine gun fire on 9th April and he writes “me and a wounded lad were about the only 2 that got away down death alley”. On 12th April Teddy was injured by a gunshot wound to the thigh and was captured by the Germans. He was taken through Belgium to a military hospital in Cologne, arriving on 3rd May. His last diary entry was 5th May saying that he had written a postcard home to tell his family he was wounded. He passed away on 26th May 2018. He is buried in the Cologne Southern cemetery and I went to visit his grave in December 2017, as seen in the photo.
With thanks to Laura Davenport for sharing this story.